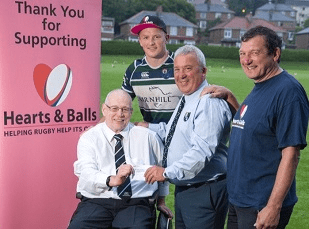 Thanks to Alan Shaw who recently covered our ambassador Jim Taylor’s story in his “Health Matters” column in the Sunday Post. You can read the article below:

JIM TAYLOR regards himself as a fortunate man. That’s despite the rugby injury 40 years ago that paralysed him from the chest down. Not even being diagnosed with breast cancer just short of his 60th birthday could convince Jim he’s not one of the lucky ones. “I’m blessed in many ways. I’ve got a great wife, we’ve been married 25 years, and if it wasn’t for Sandra I wouldn’t be half the man I am,” says Jim, 63, from Bearsden. “I’ve been very lucky, and I was very lucky again when Sandra noticed a wee lump next to my nipple and said, ‘I think we’ll go and get it checked out’.

“We got a biopsy done, were called back and I must admit I felt for Sandra because my consultant, who was fantastic, came in and said, ‘Just to let you know, Jim, you’ve got cancer and you’ve got the Rottweiler type.’ “That was December and we got the surgery early January. He gave me a booklet and said, ‘You might want to read that’ but I just said, ‘I don’t really read a lot, just tell me what I’ve to do and I’ll do it’ and he bought into the fact that was my mentality. “Once I healed up I had three lots of chemotherapy and then 16-odd doses of radiotherapy.

That was the one that worried me more but apart from losing my hair I didn’t really have many side-effects. “It was hard going and you can’t say it’s fun but it was easier for me than for some and I couldn’t have been better looked after.”

Rugby has been a lifelong passion for Jim – he combines business with pleasure by working on the commercial side for Glasgow Warriors – even though he suffered a catastrophic spinal injury in a pre-season friendly for Kelvinside Accies against Old Aloysians four decades ago. “I played prop but I was filling in at hooker so my mate could go to a wedding, and I was up against the Glasgow hooker at the time,” recalls Jim.

“It was a muddy, wet day, the third scrum went down and that was kind of it. I probably dropped my shoulder a bit, whether that caused I who knows but in reality I wouldn’t have survived if it hadn’t been for Roddy MacLeod and Paul Rodgers who played for Old Aloysians and were both doctors. “I’m absolutely indebted to them for saving my life, by not letting anyone move me.

“You look back and it was a bit of a hoot, the gate was all rusted shut and they had to burst it open to get the ambulance out onto the pitch for me! “I was in intensive care for just over a week with a kind of Heath-Robinson contraption drilled into my head to keep it steady. “Then I was moved over to the spinal unit in East Kilbride and I was there for 11 months, the first six of which I was pinned to the bed.

“You have a good rapport with the physios, they kept you going but some folk need pushed harder than others. “I was lucky in that there was something inside me that said, ‘You just fight on and that’s it’ whereas a couple of others in there turned their faces to the wall and you could kind of see them giving up. “There was one guy who the physios said they couldn’t get into the gym, and I said, ‘Can you not just take the breaks off and shove him in?’! “I wasn’t aware I was going to be in a wheelchair for the rest of my life from the word go but eventually I was given the news, ‘You’re not going to walk again, Jim’. “You have an idea, though, because you think, ‘There aren’t many tall people in here’ and you hear the squeak of the wheelchairs! “I set a goal of walking out and I did get myself up onto the bars with the callipers but I didn’t have the balance because I’m paralysed from my nipple line down.

“It was nobody’s fault. It was an accident, like the guy in the spinal unit who tripped over his dog lead and that was him. “At the end of the day it is what it is and I’ve no regrets. Each day’s a bonus and you take them as they come. “Are you always going to have a smile on your face? No, because you’re just like everyone else. “I had a year in the hospital when I was working on writing and trying to shave, all the mundane things, learning to try and use a knife and fork.

“I went back to the bank which was just down the road from my house, so every young lad that joined, it was his job to get me up and down the road – much to their joy when it was raining and they’d have to wrap me up in bin bags! “I worked with them till I was 50 and then I got the chance to work at Glasgow Warriors where I run the business club. “And the great thing is wheelchair access is getting better all the time. I can go to more places now than I could 40 years ago – I’m not classed as a fire hazard in restaurants!”

Jim was awarded an MBE for his services to charity. He is an ambassador for Hearts And Balls, providing support to other players who suffer life-changing injuries playing the game they love.